Airline Prices Are Going Up, in More Ways Than One – Tallassee Tribune

Two business travellers on a man conveyor at the airport
Prices seem to be rising everywhere you look. From a dozen eggs to a gallon of gas, common products are more expensive now than they used to be.
Even so, over the last decade until this year, airline prices were a notable exception to rising costs. According to data from the Bureau of Transportation Statistics, domestic airfare from October-December 2011 averaged $368; for the same period in 2021, it was down to $327.
That sounds like great news. However, there’s a caveat: The BTS data only includes the “price paid at the time of the ticket purchase,” excluding “other fees, such as baggage fees, paid at the airport or onboard the aircraft.” And extra fees charged by airlines have increased steadily over the past decade. So airfare alone doesn’t capture the entire price of flying.
And now, flight prices are going up. Analyzing real-time airfares, travel data firm Hopper found that domestic airfares so far for the summer of 2022 are 34% higher than they were in the summer of 2019.
In short: This is going to be an expensive season to fly, as rising base airfare costs combine with hidden inflation through airline fees.
In 2007, most airlines still included a free checked bag in your airfare. That year, baggage fees accounted for a modest $464 million in revenue for U.S. airlines, according to the BTS. Then, everything started to change in 2008.
Blaming high fuel costs, American Airlines was the first to implement a fee for a first checked bag. The cost was just $15 each way. Other airlines matched, and incremental bag fee increases have driven the price to today’s much higher rates.
Several low-cost airlines like Spirit and Frontier have even upped the cost further by charging travelers to carry on a bag that must go in the overhead compartment. 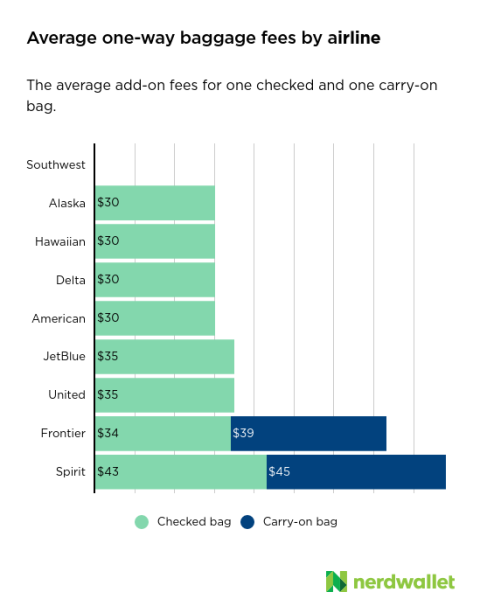 Baggage fees totaled a record of $5.76 billion in 2019 according to the BTS. That’s 12 times more than the baggage fees collected in 2008.
And yet, baggage fees aren’t the only additional costs that airlines have added over the years. Encouraged by the success in charging checked baggage fees, airlines looked for other sources of revenue, such as seat selection fees. Some international airlines even charge passengers for basic things like airport check-in.
BTS data also shows that reservation cancellation and change fees nearly tripled from 2007 to 2018, going from $915 million to almost $2.7 billion. However, in some good news, most airlines eliminated change fees in 2020 to woo travelers back to the skies.
The obvious way of saving on air travel is by booking a cheap airfare. Although airfares are high this summer, travelers can still book some great flight deals.
“Cheap flights aren’t gone forever; they’re just gone for this summer,” said Scott Keyes, founder of flight aggregator Scott’s Cheap Flights, in an email. “We’re still living in the ‘Golden Age of Cheap Flights.’”
Success! An email has been sent to with a link to confirm list signup.
Error! There was an error processing your request.
Want to get special offers in your inbox?
Want to be alerted when Breaking News happens?
News, Sports, and more throughout the week.
He points to deals that his team has found for this fall, including nonstop fares on full-service airlines between cities like New York and New Orleans for $178 round-trip, and between Chicago and San Diego for $138 round-trip — including checked bags.
Many airlines credit cards waive first checked bag fees for the cardholder plus at least one companion. This one card perk can save frequent travelers, families or small groups of travelers hundreds of dollars each year.
Seat selection fees vary by airline; some airlines only charge a fee to reserve “preferred” seats or those with extra legroom, while other airlines charge passengers to select any seat.
Travelers can avoid paying out-of-pocket for these fees by using airline miles. For example, American Airlines AAdvantage members can redeem miles at 1 cent each to reserve paid seats. That’s not the most valuable redemption, but it’s an option if you’re looking to cut costs for your flight.
Also, several premium credit cards offer cardholders a travel credit that can reimburse seat selection fees.
The best way to avoid other airline fees is by planning ahead and being in the know. Some airlines charge fees for printing boarding passes and checking in at the airport; in those cases, it’s worth it to check in online and print your boarding passes at home.
Other times, it pays to go to the airport counter. With several low-cost airlines — including Spirit, Frontier and Breeze — it’s cheaper to book airfare in person at the airport than it is online.
One more planning tip: Pack your favorite snacks in your carry-on bag so you don’t have to pay for food at the airport or on board the flight.
It’s impossible to know when airline ticket prices will cool, but many travel analysts anticipate the normal fluctuations in prices as the popular summer season ends.
If current airline prices make you cringe, consider instead booking flights for travel in the fall.
More From NerdWallet
JT Genter writes for NerdWallet. Email: travel@nerdwallet.com.
The article Airline Prices Are Going Up, in More Ways Than One originally appeared on NerdWallet.
Originally published on nerdwallet.com, part of the TownNews Content Exchange.
Sorry, there are no recent results for popular videos.
Now, more than ever, the world needs trustworthy reporting—but good journalism isn’t free. Please support us by subscribing or making a contribution.
NOW HIRING Armed/Unarmed Guards Alex City, AL Full-Time/P…
CCC Associates has positions available full time, good be…
Furniture and Brick-Brack Sale! Hwy 22 East, Alex City Sa…
Please disable your ad blocker, whitelist our site, or purchase a subscription

Airline Prices Are Going Up, in More Ways Than One – Tallassee Tribune