How many BA aircraft have the new Club Suites? Which routes have Club Suites and how to check if your flight does – Turning left for less

Some links on Turning Left for Less pay us an affiliate commission to support this blog
Posted By: Michele 30 July 2022
In this post:
British Airways originally planned to have 100% of the fleet fitted with Club Suites by 2025 and 100% of the Heathrow B777 fleet fitted by the end of 2022. This is now looking a bit shaky given the percentage of aircraft that have been fitted.
I have looked at various sources that don’t all show the same figures, but this looks like the most accurate version I can find. It does not necessarily include aircraft in storage or undergoing refitting, but it gives you an idea of how far they are with retrofitting. No Gatwick aircraft have been retrofitted yet, and I would expect them to be last.
A total of 46 out of 89 aircraft currently in service at Heathrow are fitted with Club Suites. This makes it a 51% chance of getting Club Suites on a Heathrow route; which is a bit depressing after almost exactly 3 years since they got the first A350.
There is a 0% chance of getting one at Gatwick.
Here is the breakdown by type: 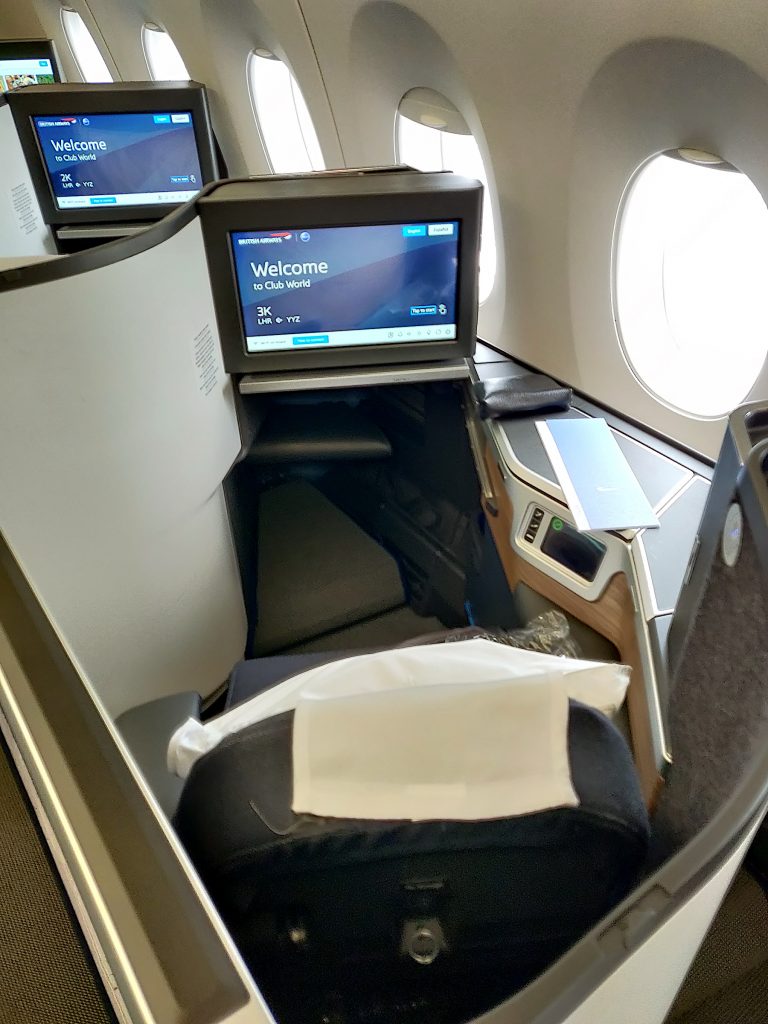 You can check the aircraft type as all A350 have Club Suites. However, it doesn’t specify the exact aircraft type for ones where the more recent aircraft do have Club Suites like the B787-10 versus the B787- and B787-9. So then, you will have to do some more digging. If you are booking New York then BA pretty much guaranteed to have Club Suites, but obviously, there can be last-minute substitutes if an aircraft goes tech.
When booking a flight on ba.com it will usually offer you a chance to book the seat for cash tickets. So you can make a dummy booking to check beforehand. You are looking for 4 seats across to indicate that it has Club Suites.

A quicker way to do research is to use Google flights. Simply search for flights (you can filter by British Airways) and look for “Individual Suite” not lie flat seat.

This is only a guide, and aircraft types change all the time. The list is what is operating currently. There will be changes for the winter schedule and again for 22/23. I’ll try to do an updated list with the changes at a later date. If you booked a Club Suite and get a seat change notification or a time change, check the seat map to see if the aircraft has changed back to Club World (as mine just did for Barbados, sob!)

Thanks for the info – I must be unlucky as my flights to mumbai, Beijing and Shanghai originally had the suites but have all been changed! Fingers crossed they all change back…
Yes the list is constantly changing at the moment along with schedules so there’s still hope.
Look at BA223 to BNA in Nov it is a herringbone layout……this is clearly Club Suite, it’s a 787-10. It was due to be an A350 starting on 3rd Sept 2020…..then Covid!
Really useful, thanks Michele…
I am booked on BA42/43 to/from Cape Town (booked this flight especially because of the club suite) – I was now horrified that they changed the equipment to the other daily CPT flight as you wrote BA58/59 does have club suite. But I quickly checked my booking and it still has the club suite seatmap available to choose seats …. Luckily! Maybe it means club suites are on both CPT flights now?!?
I did exactly the same. You are correct they have just changed to both by the look of it. That’s the problem with the list. There’s so many changes it’s out of date before I’ve finished it 😂
I did exactly the same in order to get CS but would have rather booked the other flights as timings better for me
😡 Not changing tho as I’d get charged the new higher taxes
Yes that’s annoying now if you want to change.
What about the A380’s? Or are not destined to be changed and just carry on with the sardine config until they are retired (again)…
There was a rumour that they had been approved for refurbishment but it’s never been confirmed.
FYI we have booked to fly to LHR/Dallas (using points and a companion voucher) next June on BA193/192. Both flights are showing the new Club Suites.
Thanks for the info.
We’re LHR to Atlanta in Sept (on points and Amex voucher) and when we booked it last year it showed Suites on a 781 and then it changed to a 789 (around Feb) and then a few months ago it changed back to a 781 and has been that ever since, so keeping our fingers crossed it doesn’t change again.
Hopefully at this point unless there’s a tech issue you should be ok. 🤞🤞
Michele, FYI, my wife and I are booked on LHR to MIA return next February, BA209 outbound and BA206 inbound. Currently, BA209 (787) has Club Suites but, contrary to above, BA206 is a 380 which doesn’t and, I understand, is not planned to have Club Suites.
Thanks Stephen. The list is only accurate for the current season as it will change in AW22/23 and again for summer. I’ll try to do an updated article with what’s on for the future when I get a chance.
With only two 787-10 aircraft in the fleet be prepared for a 787-9 substitution at short notice.
It’s happened to me a couple of times on the 297 to Chicago. On one of these occasions, after being rejected at the first wing security and sent back to the desk, the agent apologised for the inconvenience, with a glint in their eye asked if I knew where the Concorde Room was and presented me with a new boarding card with the number 1 on it! It was lovely to be upgraded but as most planes only have 8 First class seats now I suspect it’s something that’s less likely to happen moving forward.
Well that was a lovely surprise! But yes it’s a good point. Although they do have quite a few on order so hopefully it will resolve itself as they arrive.
What I dont understand is why any leisure traveller would book BA in the first place. Double the price and half the quality. They are just catching up with other carriers, I gave up using them years ago, AF is far superior in Europe.
LGW will be my new “local” airport from next month when we move to Hove and I was pleasantly surprised with the lounge at LGW when we flew from there last month. I don’t know what they’re going to do with both long and short haul aircraft there. The short haul aircraft are often in their twenties- A320’s – and the old high density 777-200’s are similar so I can’t see them getting the new CS. It’s going to be interesting to see what the BA strategy is at LGW. Euroflyer discussion has gone very quiet…
They stopped using Club Suites on LHR-BGI. Shame, as they face tough competition from Virgin on that route.
Thank you Michelle for digging this out. So, other than the new aircraft A350s and B787-10s, which arrived with Club Suites, BA have only retrofitted 25 aircraft in over 3 years. All this during a pandemic when many aircraft were out of service. Isn’t that just pathetic. They should be ashamed. They have lost my long haul business.
As an occasional business traveler these are great. However for personal use I would like to know if any of these suites can be joined together, my daughter is disabled and when we have flown BA before we used the two seats in the centre so we could be close. Is there a similar option for this be layout.
Yes the two seats in the middle have a divider you can put.
My wife and I are due to fly to Montreal Canada, and back from New York end of Sept to mid Oct this year. What are our chances of getting one of these new B.A business class seats ?
New York pretty much 100% unless there’s an issue on the day with your aircraft. Montreal looks very unlikely.
Your email address will not be published.

This site uses Akismet to reduce spam. Learn how your comment data is processed.

You can read how we look after your data here
Champagne travel on a Prosecco budget. UK blog on how to travel in luxury for less. Forbes contributor. #avgeek #luxurytravel #miles #luxuryhotel
Copyright 2022 | MH Newsdesk by MH Themes

How many BA aircraft have the new Club Suites? Which routes have Club Suites and how to check if your flight does – Turning left for less