Start exploring magnificent places with our weekly travel newsletter.
Chicago isn’t generally considered to have an ultra-high cost of living relative to its coastal, urban counterparts. But the Midwestern city is the most expensive major city if you need to rent a car.
That’s according to a NerdWallet analysis conducted in March 2022 of 360 rental car prices from eight major car rental companies in the United States.
Prices used were based on the company’s lowest-priced rental (typically a sedan) from airports and off-site rental car locations. These sites were in areas with the 10 largest airports based on enplanements using 2020 Federal Aviation Administration data. Enplanements concern paying passengers who board an aircraft, including those boarding another as part of a layover.
Here are the metro areas with the 10 largest U.S. airports by enplanements, ranked by average weekly car rental price from lowest to highest. Prices were based on both airport locations and off-site locations. 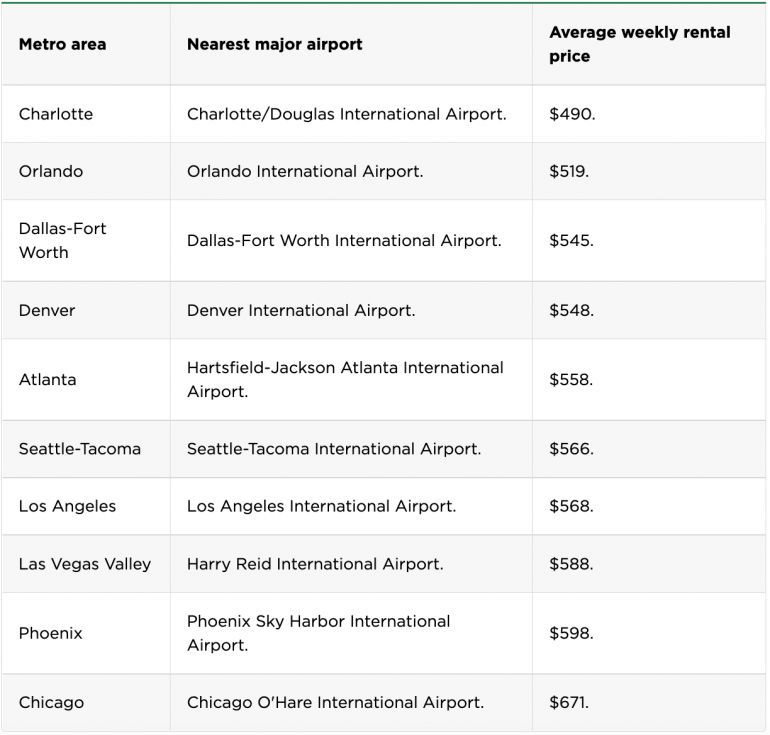 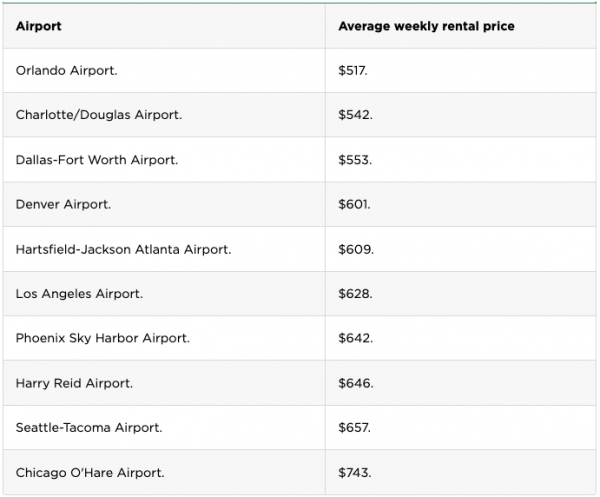 It costs $743 on average to rent a car specifically from Chicago-O’Hare Airport, which is even higher than the $671 average price to rent a car in Chicago. Meanwhile, at Orlando Airport, the cheapest major U.S. airport to rent a car, average rates are roughly in line with prices to rent a car elsewhere in Orlando.
Airport rental cars tend to be more expensive than off-site locations for many reasons. Many airports tack on rental car fees that you won’t find when renting a vehicle from the same company at an off-site location. These include customer facility charges and airport concession fees, which fund expenses like airport security and shuttles to rental car facilities. That’s on top of taxes applied at the state and local levels.
At Chicago-O’Hare, the 2019 effective tax rate, including all taxes and fees, was about 51%, according to a March 2019 report titled “Reforming Rental Car Excise Taxes” from the Tax Foundation, an independent tax policy nonprofit. In 2022, those figures include a 5% Illinois state car rental tax, a 6% excise tax levied by the city’s Metropolitan Pier and Exposition Authority, and another 9% personal property lease transaction tax imposed by the city.
Book your trip backward: This year might be the time to book your rental car first rather than plan your vacation around flight or hotel deals (as is common). First, choose a city where you can find a great rental car deal, which could likely be Charlotte, Orlando or Dallas-Fort Worth. Then, search for a suitable mode of transport and where you’ll stay.
Say you’ve settled on Charlotte because its rental car rates are so low relative to everywhere else. You can travel to Charlotte cheaply on points and miles, and from there, you might consider a road trip around the southern U.S.
Choose cities where you can take public transit instead: Sure, rental cars are expensive in Chicago, but you might not need one anyway. Chicago’s Blue Line ‘L’ train provides 24-hour train service that can get you from Chicago-O’Hare Airport to downtown in about 45 minutes, which — depending on the time of day — might be faster than driving anyway. Fares from O’Hare cost $5 (just $0.75 if you’re a student).
Seattle-Tacoma Airport is the second-most expensive major U.S. airport to rent a car from, but it’s also served by a light rail that can take you directly to downtown Seattle in 38 minutes. In addition, by relying on public transportation, you’ll save on gas and parking.
Use travel credit cards and join rental car loyalty programs: If you must travel to an expensive city and need a rental car, at least make the most of it. Charge your rental to a travel credit card with rental car benefits. The best credit cards for rental cars can offer bonus points and miles from your spending, and many come with benefits like rental car insurance coverage, which can sometimes save you hundreds of dollars.
And it’s almost always a good idea to sign up for a rental company’s loyalty program. Even without top tiers of elite status, these programs may offer member-exclusive rates and other benefits, such as members-only counters that can help you skip the line. Because even if you can’t save money, at least you can use your purchases to earn rewards — or save you time.
More From NerdWallet
Sally French writes for NerdWallet. Email: sfrench@nerdwallet.com. Twitter: @SAFmedia.
The article The Cheapest U.S. Cities With Major Airports to Rent Cars originally appeared on NerdWallet.

Traveling can be hard on the environment. Here are five simple ways for the modern traveler to engage in food sustainability.

The cost of flying is ready for takeoff, and there are few indications that the trend will curtail any time soon as ticket prices reach new highs.

Controversy over the impact of short-term vacation rentals in Hawaii persists.

There are few things more frustrating than a flight delay. Stacker looked at U.S. data to determine which airlines and airports have the most delays.

A NerdWallet analysis conducted in March tracked 360 rental car prices across eight major U.S. companies to find which had the cheapest car rentals — and which had the most expensive.

Here’s a guide and some advice for choosing the right tent for your needs.

Considering retiring on a cruise ship? You’re not alone. Deciding to retire or work aboard a cruise ship is rare overall, but not new.
Get up-to-the-minute news sent straight to your device.